Pond Aeration is probably the most important thing to consider for the health of a pond. First of all, it’s needed for fish health. Without proper aeration, fish kill can occur with pond turnover. Even if you don’t have fish, without proper aeration, the pond becomes stratified into layers of water, usually with the warmer water at top and colder water at the bottom, where oxygen is depleted. Pond aeration adds dissolved oxygen into the pond and helps to de-stratify so that oxygen is spread more evenly throughout.

In addition, without proper aeration the pond surface can become quite stagnant and full of unwanted algae growths. Muck accumulates at the bottom of the pond, sending up noxious gas bubbles, which can create a terrible smell. Mosquitoes can become a real problem.

How to Aerate Your Pond

There are two ways, from the surface of the water or from the bottom of the pond.

The most common type of aeration is surface aeration. A pump is suspended from a float and a nozzle is attached to the top. Mooring line holds the float in place. The pump churns the water below, decreasing stratification by moving the water. Water is forced into the air and mixes with oxygen and falls back into the water.

But surface aeration has its limitations.

When ponds are greater than an average of seven feet deep, bottom aeration is recommended because the surface pump won’t mix the water that far below the surface.

When using surface aeration, you have three choices.

Decorative, or display, fountains offer the most aesthetic appeal. A nozzle is attached to the top of the float to create a desired flow pattern. But the nozzle’s holes used to create the display have the effect of restricting water flow. In addition, an impeller is used in the pump instead of a propeller. Often these fountains can command tremendous heights, but the byproduct is a loss of aeration. 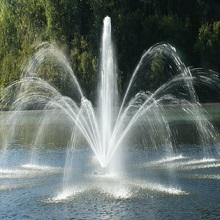 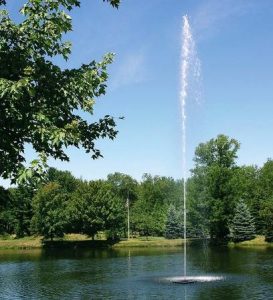 The aerating fountain is also a fountain display but only offers a single pattern, the V-shape. Water escapes the top of the pump through one very large hole, thus not restricting water flow as much. In addition, these pumps use a propeller instead of an impeller. 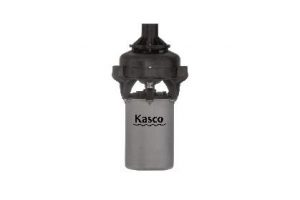 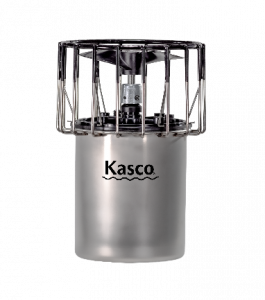 Of the three kinds of surface aerators, this one aerates the most. There is no restriction at all on the water output, and it merely bubbles or looks as though it’s boiling at the surface. 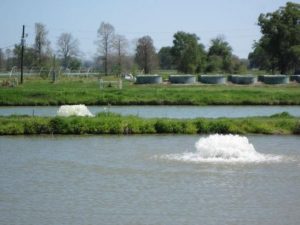 For deep ponds (over 7’ of average depth, bottom aeration is recommended. An air compressor is located at the shore and a hose carries the air to a diffuser unit at the bottom of the pond. For most ponds, all you will need is a ¼ horsepower compressor, thus making these units incredibly efficient. The compressors need to be housed to protect against the elements. 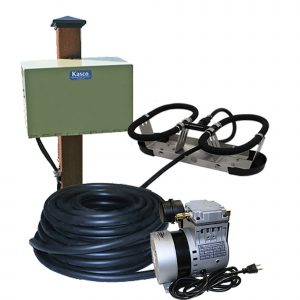 What If You Want Decoration But Have A Deep Pond?

Sometimes customers combine surface aeration and bottom aeration. Even if your pond is deep, you can still have a fountain while adding bottom aeration too. The fountain can focus on aesthetics while the diffuser unit focuses on pond aeration.

Solar aeration is an option if your pond is far away from an outlet. It is expensive, though, and requires sunlight to operate (though adding battery backs can allow you to run when not sunny). Solar aeration can be used for either surface aeration or bottom aeration.

Windmills are pleasant-looking additions to your land, but it does take quite a while to install them, and just as solar aeration needs sunlight, windmill aeration needs wind.

The amount of water volume “curved” according to various heights. A 500 gallon per hour pump, for instance, might pump 500 gallons per hour at 0” lift