Pond fountains are generally used for three main reasons. The first and obvious reason is beauty.
A nice display provides a focal point for the pond during the day or, if lights are added, at night, too. A second reason is to agitate water on the surface, thus reducing a buildup of weeds and unwanted plant life. The third reason is aeration, and this reason takes some explaining.

The Benefits of Aeration

Bacteria are all around us. They are necessary and have positive effects but can also be unhealthy for a pond ecosystem. When it comes to ponds, it is important to think about the differences between aerobic and anaerobic bacteria.
Anaerobic bacteria live in the unoxygenated parts of the pond. These bacteria digest unwanted organic debris but release a malodorous gas. They do eat away at unwanted debris but do so more slowly than aerobic bacteria. Thus, when a pond lacks aeration and oxygenation, plant material and fish wastes accumulate in the pond disturbing a healthy ecosystem.
Aerobic bacteria thrive in the oxygenated parts of the water and eat away at unwanted organic debris faster than anaerobic bacteria, thus providing a healthier pond. To create a healthy pond environment, it is necessary to circulate the layers of the pond water and spread aerobic bacteria throughout.

Aeration mixes the warmer surface water with the colder, deeper water, thus creating a more consistent temperature throughout the pond. Fish will be healthier, and algae will be decreased. There won’t be as much buildup of bottom muck.

Should I Use a Fountain or an Aerator?

First things, first. A fountain IS an aerator. It is just not aerating as much as a pure aerator.

All pond fountains are surface aerators, that is, the fountain floats on the surface of the pond. A pump is attached underneath a float and a nozzle is on top of the float, connected by plumbing to the submersible pump. The nozzle creates the display pattern. Decorative fountains focus on the display and often come from the factory with several interchangeable nozzles. The fountain pumps use impellers and nozzles that display high and wide. Aerating fountains balance aeration and display by using a propeller and a V-shaped pattern only. The “nozzle” is really a large hole, thus not reducing flow the way intricate nozzles do (the holes in the nozzles of decorative fountains create the display but reduce the flow). To get the water up high and wide, small holes need to be used. So as a general rule, fountains that create tall and wide displays aerate less than aerating fountains with a large hole. 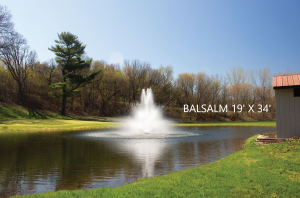 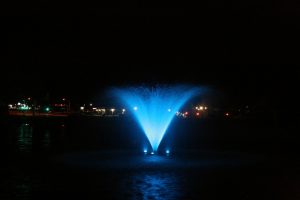 Aerating Fountain by Kasco at night

What Size of Pond Fountain Do I Need?

For decorative fountains, Kasco Marine recommends using a 2 HP pump for every 1 acre of surface area (a 200 x 200’ pond approximately). For aerating fountains, Kasco recommends using a 1 1/2 HP for every surface acre. But this ratio is for Kasco fountains! Some companies provide very tall or very wide displays, but to get that water so high the nozzles are restricting quite a bit of flow. If you see a one-half horsepower unit pushing the water 40 feet into the air it is doing so by restricting the outflow of the pump, decreasing the aerating properties. Also, other companies rate their pump horsepower differently, some using input horsepower instead of output horsepower, which is more important. Flow is what really matters.

The kind of nozzle used is going to have a deep effect on the volume of water your fountain is circulating. Small-holed nozzles make for taller and wider displays, but they definitely restrict flow. Though a fountain pump might have a flow rate of 10,000 gallons per hour, the net flow rate of the fountain due to the nozzle restrictions might only be 2,000-3,000 gallons per hour. You need to know the flow rate coming out of the nozzle, not the free-flow rate of an unrestricted pump.

Even aerating fountains are less efficient at aeration than pure aerators, whose sole purpose is aeration. Display aesthetics are not a goal. A surface aerator is merely a pump underneath a float bubbling water at the surface. Water is drawn from fairly deep into the pond and brought to the surface. There is considerable agitation and mixing, reducing stratification in the pond

A Bottom Aerator by Kasco

Solar Fountains
Finally, many ponds are a long way off the grid, and a homeowner might not want to install an electrical outlet near the pond. In this case, you might want to install a solar system. These units are quite a bit more expensive than traditional electric pond fountains, and if you want them to run when there is not sun out, you will need to install battery storage as well.

Aeration of whatever kind will make you pond ecosystem heathier. Mixing the layers of water will result in more consistent pond temperatures throughout your pond. Aeration will decrease unwanted algae growth and muck and provide fish with necessary oxygen.

The amount of water volume “curved” according to various heights. A 500 gallon per hour pump, for instance, might pump 500 gallons per hour at 0” lift